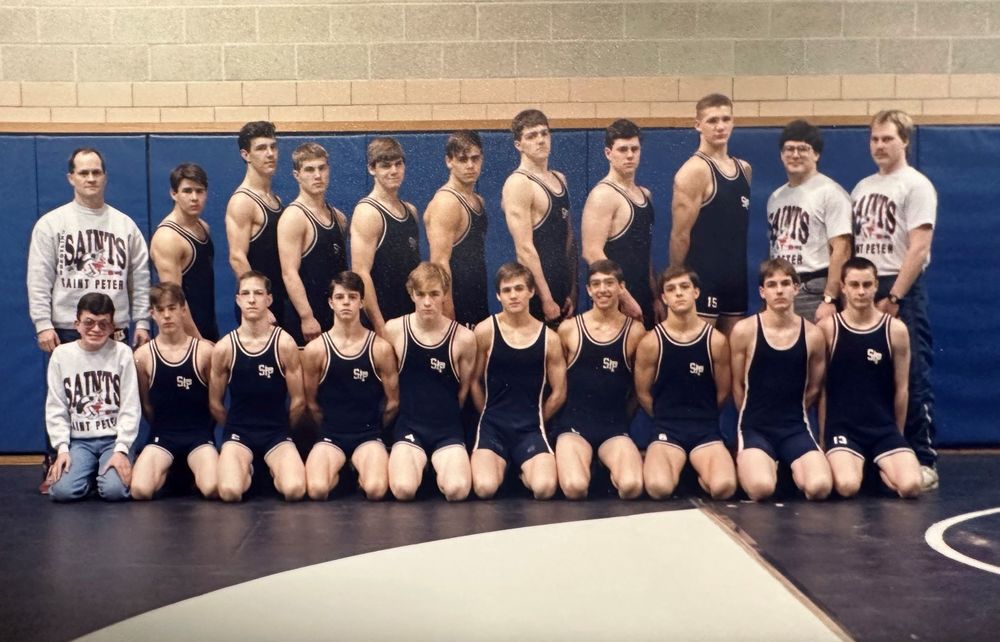 Saint Peter High School has had numerous individuals achieve success on the wrestling mat over the years, including several state medal winners. However, the Saints have had just one team, the 1992-93 squad, qualify for the Minnesota State Team Wrestling Tourney.

That Saints’ squad will be honored the evening of Tuesday, January 17, when this year’s Saints’ squad hosts Waseca at the SPHS gym. The junior varsity kicks things off at 6 p.m. The recognition for the 1993 state squad will be between those two matches (at around 6:30 p.m.) in honor of the 30th anniversary of that dream season.

The 1993 Saints had high hopes entering that season as the Saints posted a winning record the season before and qualified for the Section 4A team semifinal round in 1992 after placing as Section 4A, Southwest Subsection runner-up. Head coach Craig Drager and his assistants Tom Conlon, Joel Timmerman and Keith Hanson welcomed a large number of veterans back from that team, giving Saints fans a sense of optimism.(NOTE: Hanson is one of the Saints’ current co-head coaches while Timmerman is the father of Ryan Timmerman, St. Peter’s other co-head coach.)

“We, as a coaching staff, kind of had a feeling we’d have a good team heading into that season after surprising a lot of people by making the Section 4A team tournament the previous year,” Drager said of the 1993 squad. “That next year the guys really wrestled well all season, and the thing that was most impressive was everyone in the lineup being willing to move up or down the lineup to help the team. It truly took a team effort.”

After finishing the regular season with a 14-4 record, the Saints took top honors in the Section 4A, Southwest Subsection meet to qualify for the final four in Section 4A. St. Peter rolled by Scott West 37-22 in the Section 4A semifinal round, and then clinched the Saints’ first and only team state berth to date, with a convincing 31-18 win over rival Sibley East in the championship.

“We got off to a rough start against Sibley East as we ended up having a disqualification in the first match, one we figured going in would get us six points by pin,” Drager said. “That 12-point swing against us kind of worked to our advantage. After it was determined our kid was getting disqualified on a questionable call, I gathered the guys together and told them, ‘Don’t make this a season of ‘what ifs?.’ The boys came out really focused after that and we got on such a good roll over the last four matches to put them away.”

At state, the Saints ran into a buzz saw in the first round losing to the eventual state champs, Foley, 45-6 and then saw their team portion of the season come to an end with a 47-12 loss to perennial state power St. Michael-Albertville 47-12 in the consolation semifinals.

“Unfortunately, the luck of the draw put us up against the eventual state champs right away and they ended up pretty much dominating at state. Then we ran up against another powerhouse in St. Michael-Albertville in the consolation round and our season was over. Nonetheless, it still was an amazing run and that whole week leading up to state was just an amazing time for everyone, including the fans, who really got behind us.”

“It's pretty neat for me personally to have this recognition of the 1993 team, because I remember being in the wrestling room with all those guys as a little kid,” Ryan Timmeran said. “Growing up I didn't go to daycare, I just went to practices with my dad. I see some of those guys around town and they always say, ‘I remember when you were just "this big" and running around in diapers.’"

Below is the Saints' page in the 1993 MN State Wrestling Tourney program. 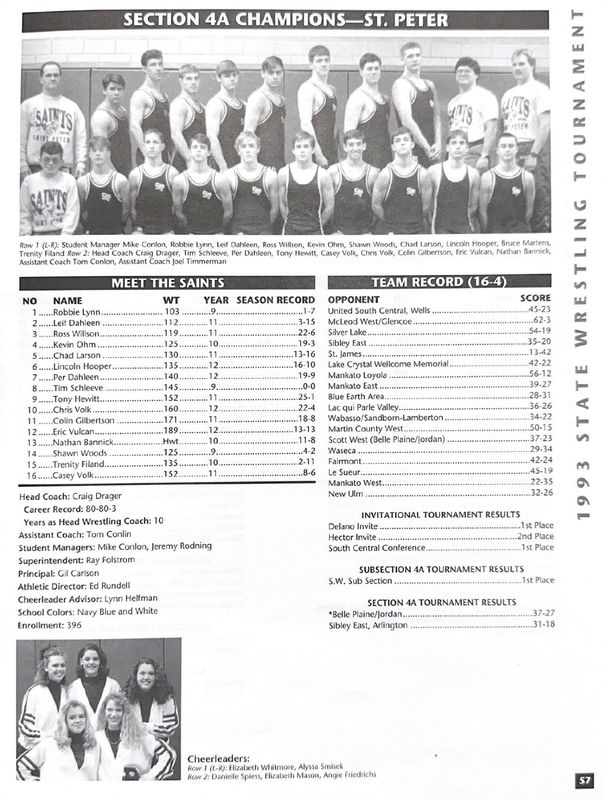